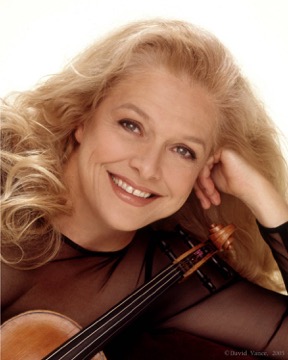 Carol was a member of the Vancouver Symphony, La Scala orchestra of Milano, RAI Orchestra of Torino, Philadelphia Opera and Ballet orchestras, Philly Pops orchestra, leader and solo violinist of I Solisti Aquilani with which she toured the world, and the associate concertmaster of the Florida Philharmonic and Florida Grand Opera. She has recorded for Sony, Miramax, Bongiovanni, Harmonia Mundi, and Eurartists.

At the Curtis Institute of Music she studied with Arnold Steinhardt and chamber music with members of the Guarneri, Budapest and Curtis string quartets. As winner of the San Francisco Symphony Young Artist competition, Carol made her debut with the San Francisco Symphony at age 13. At age 15 she was hailed as “one of California’s most gifted musicians” by the San Francisco Chronicle after a flawless performance of Bernstein’s ‘Serenade for violin and string orchestra’. She won top prizes in many violin competitions including: the Stresa International competition and the Performers of Connecticut Chamber Music competition at Yale University. She is laureate of the Romanini and Lipizer International Violin Competitions and the Kennedy Center Violin Competition for Contemporary Music. Recent appearances include performances in Philadelphia with members of the Philadelphia Orchestra, chamber music tours of China, Cuba and Jamaica with Lynn Faculty, and performances of Mozart concertos, the Beethoven Triple Concerto and the Brahms Double Concerto with the Lynn Philharmonia Orchestra.

For over 30 years Carol has devoted herself to violin teaching in South Florida. Her students have been awarded dozens of prizes at state, national and international violin competitions. They have won positions in major symphony orchestras including Chicago, Pittsburg, Colorado, National-DC, Ningbo-China, Puerto Rico, Sao Paulo, Sun Symphony-Hanoi, as well as in diversity programs of the Cincinnati and Grant Park orchestras. They also regularly perform with the many professional orchestras of South Florida, and many have full time teaching positions. For twelve summers Carol was an artist faculty member at the Indiana University's Music Festival and String Academy and was recently on the faculty of the Meadowmount School of Music in NY. Since 2006 Carol has been Professor of violin and chamber music at Lynn University's Conservatory of Music. She is the recipient of the 2014 Gitner Excellence in Teaching Award and was named “2012 Studio Teacher of the Year” by the Florida Chapter of the American String Teachers Association.